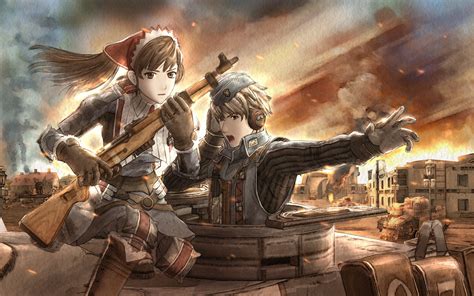 Valkyria Chronicles 1 Out Today on Nintendo Switch: Costs $19.99: Only takes up 7.4 GBs

Today, on the Nintendo Eshop, I found Valkyria Chronicles 1 on the digital store.

It currently costs $19.99. It also includes all the DLC that was released on the PlayStation 3. The original story is still intact (Obviously).

A brief synopsis of what to expect, straight from Nintendo’s official description of the game on the Eshop and it’s website.

“In the world of Valkyria Chronicles, the year is 1935 E.C., and the continent of Europa has been plunged into the Second Europan War between the Autocratic East Europan Imperial Alliance — also known as The Empire — and the Atlantic Federation over the precious resource Ragnite. The Empire is sweeping through the continent like an unchecked wildfire and has its eyes set on the rich Ragnite deposits of the Principality of Gallia. Although peaceful Gallia remains neutral in the conflict, its citizens will need to defend home and country against the inevitable invasion. Follow Lieutenant Welkin Gunther and the vaunted Squad 7 of the Gallian Militia as they take on the seemingly insurmountable forces of the Empire.

As far as storage space is concerned, it only takes up 7.4 GBs (Gigabytes) of storage space on either your Switch itself on an SD Card.

In addition to being portable due to the Switch’s handheld mode, it also is able to have its’ save data backed up via the Cloud, but only if you have a Nintendo Switch Online Subscription.