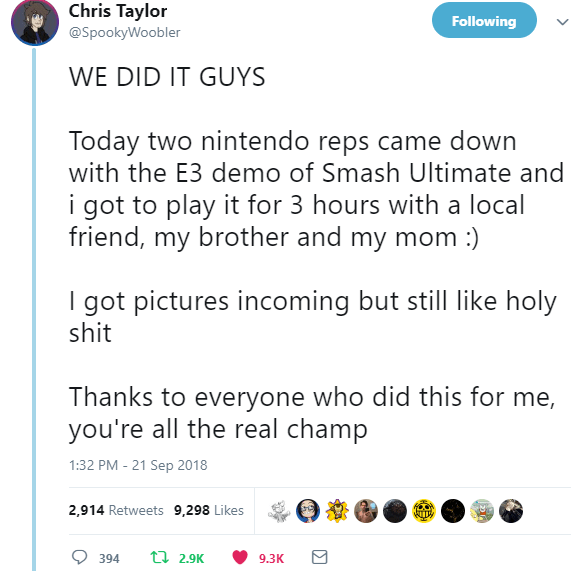 EDIT: The featured image in question contains some foul language. We here at Joycon Gamers humbly apologize for that little oversight.

YES! You are reading this correctly, and no, your eyes are NOT deceiving you.
Chris Taylor has posted a twitter update about how/if our efforts worked.

If you still don’t know why we’re so elated right now, then I direct you to this prior article we did on this story: https://www.joycongamers.com/inspiring-many-decent-sized-profile-twitter-users-join-together-to-try-to-make-a-dying-fans-final-wish-a-reality/

I’ll let the header/preview image speak the results as to our efforts – basically, WE DID IT!

And here’s an image of proof, courtesy of Chris Taylor/Spookywoobler,  showing him and his friends play the E3 demo build of Super Smash Bros. Ultimate.

Now, there are some interesting bits of knowledge from the man himself. First off, he had apparently received word of Nintendo preparing to bring the demo to him on tuesday, so it’d be here by around today. He couldn’t say anything because the E3 demo build of Smash Ultimate is very valuable and if word had gotten out about it by some “leaker,” then the E3 demo would’ve been in danger of either being stolen for profit, destroyed, or worse of all, datamined by hackers and having the ENTIRE roster and every mode and feature potentially spoiled as a result.

He did get to play the game with his brother, a friend named Benjamin (Who bears no resemblance to Black Mage Mavvy Benjamin or Itionoben Benjamin other than sharing the same name, by the way.) for 3 hours.

More pictures will be posted by him on twitter in the coming days.

We here at Joycon Gamers are proud to have joined the effort to make this remarkable feat happen.