Folks, I did NOT want to start the new year off with Pokemon news that also has to serve as a danger alert, but apparently we’ve reached that dreaded point.

I don’t have a good lead-in to this story that doesn’t involve profanity, so I’m just gonna get straight to the point: ToonKryticY2k is back on the internet, apparently LET GO by the police despite OVERWHELMING evidence against him (Actually, I WISH that were the case. . . as he NEVER was arrested – at ALL!), and now he’s in a position to permanently scar the Pokemon community mentally, sexually (ugh I can’t believe I had to mention that), and psychologically.

But let’s say you never heard of this guy and his atrocities. Don’t worry, my fine pocket monster squadmates, Discord, Twitter, and freaking Youtube have you covered. 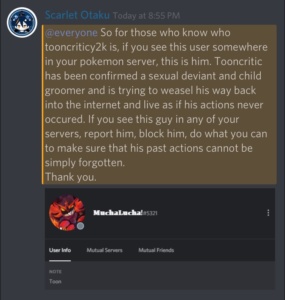 For those of you who’re STILL confused about this. This brony dude named ToonKryticY2k (Yes, that’s Krytic with a “K'” – haha, Mortal Kombat reference, hurr de hurr durr.) had psychologically damaged his (ex)-friends, JoshScorcher’s then-girlfriend-now-finacee Aramau, and tormented and emotionally abused and violated so many other people in the Brony community that to call him a “demon” wouldn’t be an insult, but a COMPLIMENT to a monster this disgusting!!

Now, nearly one year later in 2019, he’s gone on to (presumably) do the same thing to the usually incredibly volatile Sonic and non-volatile TTTE communities. (I’ll have to get back with an update in the comments on that one, folks.)

And NOW to make this worse, he’s not only NOT in prison, much less arrested, in part because of some police corruption or whatever patheticness caused them to let him be free, but now he’s going after the Pokemon community next, and none of the big guys I know of that I’ve alerted about this such as Joe Merrick (The owner of Serebii.net), Fawful’s Minion, The Speedster, The Quarter Guy, etc. have not done much about this yet!!  Seriously?! People’s emotions and potential physical, psychological and even sexual safety could be in a LOT of danger and nothing’s gonna be done about it?! I can only imagine how worse things’ll get for Verlisify if he, of all people, does nothing to “protect” the community he claims to”love” and “support.” . . .

NOTE: The Quarter Guy has just posted about this. Here it is.

This makes freakin’ Dr.Weil from the Megaman franchise look ALMOST like a saint in comparison. The fact I even had to make such an idiotic comparison shows how dreadful and monstrous he truly is. To be blunt, BOTH suck. But while they both flaunt the laws of their realities, torment all they crosse, hurt and ruin countless communities for years to come, and the damage they’ve done is long-lasting if not outright permanent. But at the very LEAST, to Weil’s credit, he got his just desserts by the end of Zero 4 and ZX Advent, while ToonKrytic? He says “Haha!” and slinks off for a year after getting caught so he try to torment another community filled with minors, pre-teens, early-teens, etc., like a career criminal!

Ohhh, I wish I could say I was done, but we’re  JUST getting started, everybody.

Now, it’s come to light that Josh and Toon’s other ex-friends coming together to inform everyone else about all this had to occur because someone STUPIDLY leaked all the info, which, while a decent attempt admittedly at ensuring he was forever reviled, unknown to us at the time, allowed ToonKryticy2k to digitally hide all related evidence to the point where apparently even the FBI can’t find the info needed to arrest and imprison this guy.

And to add MORE insult to injury, the effort effectively being spearheaded by me reaching to all the big Youtubers I know to warn of this monster’s reemergence could -hopefully NOT – lead to him repeating the same processes he did to avoid justice last time.

Bottom-line: TooKryticY2k is a disgrace to the Pokemon, Sonic, TTTE, MLP, and Super Smash Bros. communities, and plenty of other communities whose tragic tales probably haven’t been shown yet. He is a complete, irredeemable monster in human form, and his atrocious and life-altering deeds are so disgusting and heinous, that I can’t even find the right words to describe them and him that wouldn’t involve the use profanity! That’s how much I hate this monster!!

ohh, and for good measure, there’s a plethora of Youtube videos about this guy that willingly go into far more explicit detail than I ever could muster up the courage to attempt to explain about this person. Those videos are out there, people. . .

In conclusion, ToonKryticY2k is a monster by every definition of the word. He’s a cyber-sexual monster, a creep, and a disgusting piece of garbage! IF by some chance you’re contacted by this. . . monster, block him, report him, do whatever you need to do to get this guy potentially brought to legal justice once and for all!

Yeah, this year started us off in the “bad” timeline as some of you out there put it. I just want this nightmare to end ASAP so I can get back to much more family-friendly stories about video games coming to the Switch and Nintendo announcements in general.

I won’t be posting for the next week or two. I got a few reviews to finish my thoughts on (Warframe, Pokemon Let’s Go, and Smash Ultimate). I was gonna make a video,but that’d give him even MORE attention I feel he doesn’t deserve. I’ll see you then.