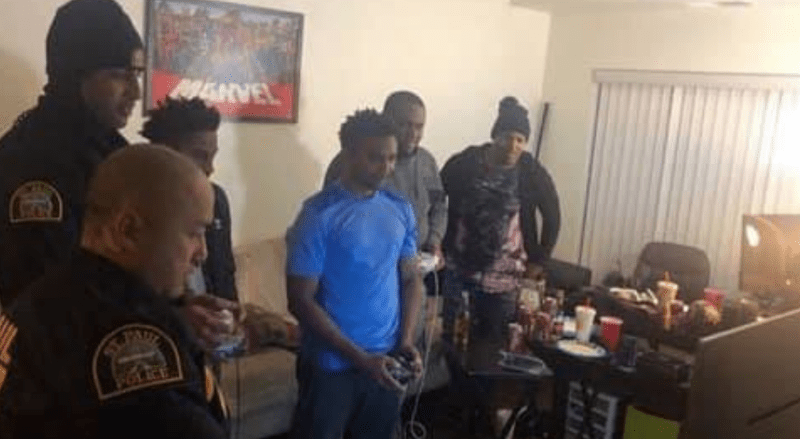 RANDOM: Cops Called to Handle a Noise Complaint End up Playing Smash Bros. Ultimate with a Group of friends Instead

Folks, Super Smash Bros Ultimate has been out for less than a week, and the game has already been bringing people from different professions, walks of life, etc. together to play this amazing game.

Case in point, when Jovante Williams and his friends were playing the game, they apparently got a little too loud, which led to some cranky and annoyed neighbors, who were probably trying to sleep or watch TV peacefully, call the police in St. Paul, Minnesota. That led to the police showing up at Jovante’s apartement.

However, unlike how the mainstream media LOVES to apparently accentuate even the TINIEST negative regarding cops, this story has a happy and humorous ending for all involved. The volume was (eventually, presumably) turned down, the officers and adults got along, and many good times were had with this game between them, and of course the boys didn’t get in trouble.

That being said, the very fact that I even HAVE to report on what should be – and used to be when I was growing up  – an everyday positive occurrence is disheartening due to all the negativity surrounding the police these days.

Smash Bros. – particularly Super Smash Bros. Ultimate – has become a special place in gaming history, and not just because almost everything went smoothly for this game and us loyal fans -minus some insensitive leakers. (All previous veterans including Ice Climbers and Snake, popular newcomers like Ridley, Indie game spirits like Shantae, Risky Boots, and Shovel Knight and Assist Trophies, Rathalos, bosses such as Dracula,  unexpected DLC Characters such as Piranha Plant from Super Mario Bros. and Persona 5’s Joker/Ren Amamiya, etc.) It’s also because of how it brings people from every walk of life together, like this story ended up doing.

Smash is the game we need right now during these tough times. From all of us here at Joycon Gamers, I just want to give a HUGE heartfelt thank you to Nintendo and Sakurai for everything up to this point. Keep being awesome and surprising us.