Super Mutant Alien Assault opens with a short cutscene that sounds like it is narrated by a voice actor imitating Optimus Prime of the Transformers.  He gives you a basic rundown of the story and then the game moves on to the title screen. You have three options here. The first is to jump right in and begin playing, endless which is locked, and then options. 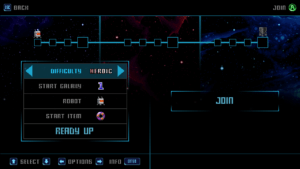 The first thing to do before jumping in is to look at the options and set your controls. For me, it was a matter of finding the control scheme that worked best. The game allows you to change the controls to set the buttons you are most comfortable with.  This is a great feature as it made playing a smooth experience. I began playing without adjusting the controls and found the experience of playing much better after I made my adjustments.

Once you jump in and start playing the game has the difficulty settings of normal, heroic, and epic.  You begin with normal as the other two choices are locked. You also have three galaxies to choose to play but must unlock them as you go.  There are also multiple characters to choose from but once again they are all locked with the exception of one. The theme here is play to unlock the content in the game.

Once I had gotten the game all set up and begin playing I was hit with a wave of nostalgia as the game very much looks like an old school 8-bit Nintendo game from the NES days. The game is set on a spaceship and you are a robot fighting off the titular Super Mutant Aliens that are attacking your ship.  The biggest catch is that you must kill them quickly before the glowing green radiation mutates them into more powerful monsters. Each level is a screen that can occur at random and you must jump your way around to retrieve your weapons from the vending machines and destroy the aliens to clear a stage and move on to the next one. 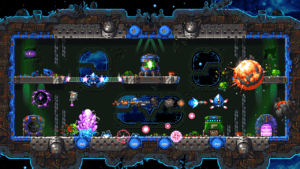 The game requires quick movements in limited space because if you stand still you will die.  You learn this very quickly as things are constantly coming at you. The levels are constantly rotating as I learned from dying and restarting multiple times only to find the levels I had already passed were now different from the ones I faced the second time around.  This was a nice touch as it made the game more complex and did not allow for just memorizing the levels and running through the game without replayability. Although it was frustrating at times to die and restart with a new level it did break up the monotony of playing the same levels over and over as you died.

The game does add some nice touches as you reach certain levels and have to do different things like shut off power cells as they cut on and take batteries to power cells as you are destroying aliens. This adds to the challenge as you now must complete various tasks all while avoiding and killing the aliens that are all around you.  The game slowly unlocks weapons as you are playing and those become part of your arsenal from the vending machines. The aliens vary in their movements and attacks making the game even more challenging as you play and they appear. Just when you think you have them all figured out new ones appear to challenge your gameplay.

All in all, it is a great game if you are looking for something challenging that is ever-changing.  The randomness of its levels, enemies, stages and the weapons you receive from the vending machines make for a unique experience each time you play it.  This is not a bad thing but can make for a frustrating experience because as you die you must start over on a random stage one and make your way back to the last level that you had cleared.  Be prepared to take this trek a lot as you will die multiple times the game gives you five hearts that do not replenish between levels so I found me making it through the first stage and then dying pretty quickly on the next stage over and over again.  The game does have a two-player component that further complicates things as you find yourself fighting for weapons and item drops as well as avoiding friendly fire. 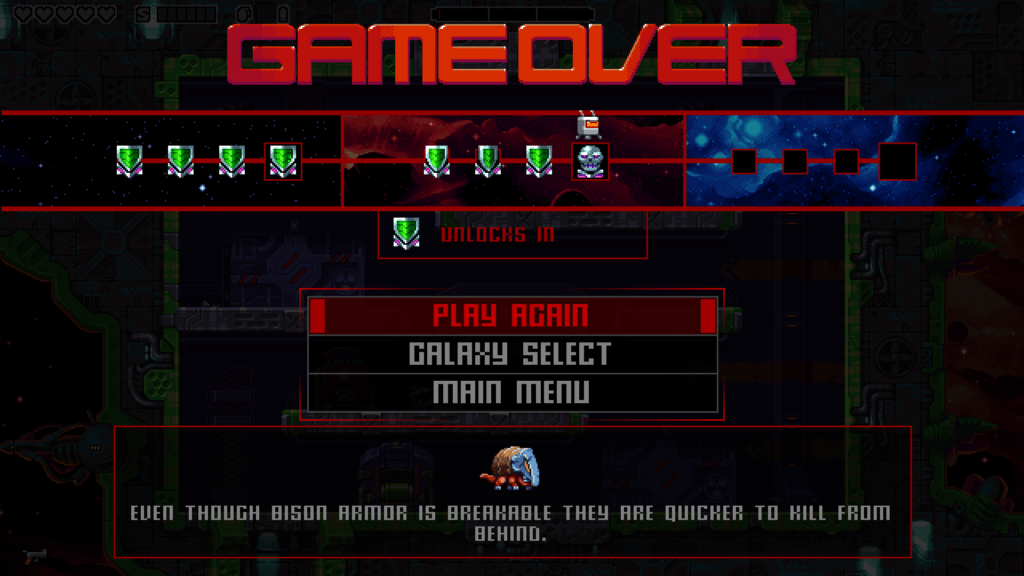 Super Mutant Alien Assault reminds me of a simpler time when games were more complicated.  If you enjoy a challenge this game will give you one and makes for a nice distraction if you are looking for something to play in a small burst at a time while you are on the go.  Just make sure to turn the volume down as the background music can be somewhat annoying.

This review was a guest post written by Joshua Boyd.