When I first saw StarGhost, I saw flashbacks to my childhood playing Super R-Type and Gradius. I loved side-scrolling shooters when I was a child, but would StarGhost live up to those childhood titles?

I would like to say in one word “Yes,” but it’s not that simple. I will explain this in a few paragraphs below. StarGhost for the Nintendo Switch is an automatic side-scrolling shooter, with simple controls and a pretty simple storyline to it. The game has an easy learning curve and insane replayability. This is game, as I’ve said before, is a game I could see myself playing over and over, and with the Nintendo Switch’s portability I get to play it anywhere I go.

The story is simple, an enemy fleet has been spotted at the outer perimeter, and you get to pilot the most advanced starship ever built through 12 star systems as you fight through exploding star systems, asteroid fields, and dogfight with deadly sentinel ships in-between fighting through waves of relentless enemy fleets.

At its base, StarGhost is a side-scrolling shoot ’em up, but thankfully it’s not just a generic shmup. The level design never gets old or tiresome as they are dynamically generated for each playthrough, so you’ll never really see the same level with each playthrough. The controls are super simple, you blast your way through each level by using your booster to move up the screen using your left analog stick to control your auto-firing turret to destroy enemies on-screen. You can upgrade your ship by picking up power-ups during the levels, or between each level with in-game currency that is placed throughout the levels, or pop-up when you destroy enemies.

The game is graphically beautiful as you fly through the dynamically generated neon star systems. The action on-screen flows smoothly as wave after wave of enemy appears to kill you. I noticed no noticeable hiccups in graphical performance while playing docked or undocked. The soundtrack is gorgeously put together by the renowned composer, David Wise. The voice acting lends itself well to the sections that have it, the beautiful graphics and gorgeous music even make me forgive the cheesy lines you get between levels, with my biggest peeve is “Spending feels good.” I love it though, the voice actor has a lovely voice. 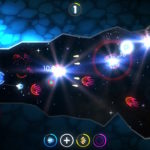 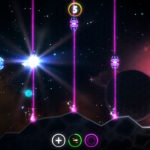 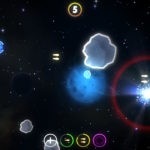 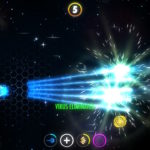 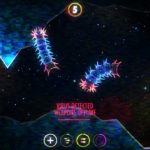 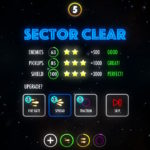 I think the biggest positive of this version of the game over the Wii U version, is the pick-up and play aspect of the Nintendo Switch itself. this game has an easy enough learning curve to be one that anyone can play, anywhere they are for any amount of time they want. This game shares some aspects of games such as Flappy Bird and Jetpack Joyride, in that it challenges you to outdo your previous play through. I would love to see some sort of permanent upgrade system ala Jetpack Joyride, but this is a game I cannot recommend enough to every Switch owner that enjoys shoot em ups, and to any Switch owner who enjoys quick to play games.

Check out the StarGhost trailer below and visit the Nintendo Switch eShop today to buy it for just $8.99.  A review copy was provided by the publisher for the purposes of JoyCon Gamers to review this game, this in no way affected our decision on the score of the game. Let us know in the comments below what you think about this review and this game.

StarGhost for the Switch is a simple, easy to play game every shoot ’em up fan will want and every gamer will enjoy.

I grew up on the Atari, Nintendo Entertainment System and the Sega Genesis. I started my love affair with gaming with Mario, as most kids do, and continued it with Dragon Warrior(Dragon Quest for those who don't know history). Some of my favorite games growing up were the simplest, with Adventure for the Atari 2600 being one of the games I had the most fun with. Still to this day I enjoy that game, and those duck looking dragons. Today I play a variety of games when my mind will let me, which comes in spurts. Right now I am playing a bit of Minecraft.