Sniper Elite III Ultimate Edition by Rebellion Interact is a third-person shooter that is a pleasant surprise on the Switch.  The game drops you into Africa during World War 2 as you must battle against Nazis to help stop a superweapon program that could end the Allied Powers resistance. 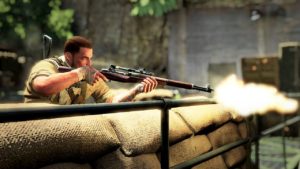 The games options allow for you to adjust the sensitivity of your buttons, turn on auto-reload, use aim assist, and set up the style of the bullet camera.  The game has four main modes Campaign, Solo Survival, Cooperative, and Multiplayer Mode. It also has a Shooting Range mode that allows you to practice your skills and become a better shot.

The Campaign mode consists of eight different areas that are open world and allow for free movement. Each of the eight levels has objectives that must be completed to open various collectibles.  These levels allow for a learning curve that allows for the casual player to learn and grow as a player. This mode also allows for setting the difficulty between five different levels. You can begin with the lowest of difficulties that start at Cadet and works up through the levels of Marksman, Sniper Elite, Authentic and finally Custom that allows you to get even further in detail with the type of difficulty that you want.  The Solo Survival, Cooperative, and Multiplayer Mode are made for the veteran third-person shooter player.

The game’s graphics and sound effects are well done and realistic as you work your way through the missions with dust and sounds that you would encounter if you were in North Africa.  The cutscenes between levels set the stage for a battle at each of the different locations. The game uses realism as your shots can be heard by the enemies without the appropriate use of the sounds around you to masks them. 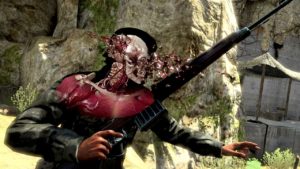 The gameplay is your standard third-person shooter leaves you battling enemies for survival and to complete objectives throughout your missions.  You can also search the levels for optional objectives, collectible cards, sniper nests, war diaries, and long shots. The game allows for Sniper shots from far away, hand to hand melee combat and close-range shooting.

The game is at its best when you are entering the perfect Sniper shot and the camera moves into bullet time as you follow the bullet to its destination. Perhaps the best part about this is the impact as the game allows for you to see the bones and organs as the bullet enters the body and you get an x-ray shot of the damage that the bullet is doing to the body of your target.  As you set yourself up in a Sniper’s Nest you can set up traps to keep yourself safe. The use of landmines as traps for approaching enemies makes for an interesting challenge to stay alive. The use of sounds to mask your gunfire keeps you from having to relocate after every shot as the enemy will find you and make your job harder.

The game is a lot of fun and allows the casual player as well as the dedicated fan of shooters to play and enjoy it.  I would recommend this game to everyone who enjoys a third-person shooter. The sniper aspect just makes it even more enjoyable and fun to play.