Rogue Aces is an exciting aerial shooter that focuses on a pilot working to complete several missions for their commander. With more than five game modes to try out, players will surely find a favorite among them to come back to in their pass time!

Upon launching the game, you are greeted by your commander with an immediate tutorial. Here, you are taught how to fly, land, eject from your plane, and more. This does not take long at all and you are even given the option to continue on to further tutorials or get right into the game’s campaign. Though this is not something I would recommend since there are only five parts to the tutorial in all, the option is certainly up to the player in case they are quick learners. At this point, players get a feel of the controls during the tutorial and the initial layout provided is not hard to grasp. If however, you would rather a different control scheme, this game does offer classic, alternate, and customizable settings in case you would rather have specific mapping for your controller.

After you get through the tutorial, you are shown the very simple and easy to navigate menu. This even features a user select option in case you need to switch between users on your console. I found that to be a great touch in the game to allow everyone to keep up with their own stats. Alongside all of this, you’ll notice the background music, a catchy rock instrumental featuring a killer guitarist. Might I just add that the entire soundtrack for this game is perfectly suited for the action that players will endure. I could not imagine any other music being played while I’m flying through the air targeting enemy planes. Though I am sure that the team over at Infinite State Games would be able to make it work, this music just fits!

Getting into the menu allows players to choose from one of two game modes — at first. Players will notice the options: Campaign Modes and Training Ground to start. Training Ground is a great place to go to after the tutorial just to get your feet wet and get a feel of the games mechanics. It’s also great to play between other modes for a more relaxed experience, since you’re immune to death and you have unlimited ammunition. As far as the campaign modes, the normal campaign is just one of three options available for players until the others are unlocked over time.

Normal Campaign Mode is just what you may expect, an objective based mode with several missions required to complete in order to progress; just without the story. There are no characters to get to know or a solid plot to involve yourself in. Instead, you’ll have a few sentences of dialogue to read from the commander which usually includes something funny and witty to hint at your current objective. This is followed by your character simply accepting the challenge with a phrase such as, “Roger that!”. For those that simply want to get to the action, players have the option to quickly skip through the conversation by spamming the select button. And no worries, the mission’s objective is always available to view in the start menu. 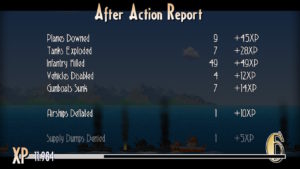 The rules are pretty simple. Take off, complete your mission, return to base, and get another. This cycle can repeat for as long as you are able to do it with your three chances given, or in this games case, three planes. At the end of your round an action report sheet appears letting you know of your final score, missions completed, and a breakdown of other stats during your run. Experience points, or XP, is rewarded and added onto your cumulative score to build up your ranking as a pilot.

One of the best highlights of Rogue Aces is that you are not entirely bound to the current objective. If you want to focus on shooting the most fighter planes or simply gaining more experience points, you are able to do that at anytime. All of this is attainable while in the middle of any mission, the decision is ultimately up to you!

As expected, the missions get harder as you get further into the game, and the great thing about Rogue Aces is that the missions are randomized so you will rarely ever play the same “Mission 01” objective and so on.

Rogue Aces is packed with action and can become very fast paced as you move on to the later missions and that’s the fun part. As you gain more experience and you complete certain objectives, more game modes also become available. As explained before, players are provided with only the first two out of eight total modes in the game. The other six modes are hidden and unavailable until unlocked. This definitely encourages the players to put more time into ranking up and progressing in their skills to experience all eight modes.

I got 99 problems, but my Switch ain’t one! Big time gamer and comic book reader. I can go on and on about both! Check out my take on all things Nintendo.