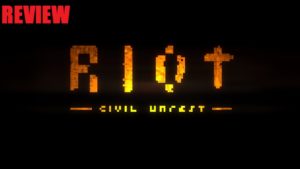 Riot- Civil Unrest is definitely an interesting take on the
RTS genre, especially since over the years we’ve sort of
grown accustomed to seeing this particular type of game with
heavy military themes. This one is a little different, particularly
in terms of it’s general topic or theme. As tensions rise in this
“riot simulator” you find yourself being on either the side of
the police, or as they’re often to referred to in-game, the rebels.
While the game does a fantastic job of using the settings from some
pretty recent events, it also does a pretty good job at not being
overly political by not really giving any context to the situations.
Although the scenarios you’re thrust into are clearly based on real
events, it’s really just through the player being able to recognize
the particular phrasing or location names that were involved in the
real life incidents. 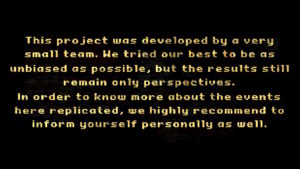 The game has some pretty old school inspired pixel graphics which
for some reason I always love. They just remind me of a simpler time
I guess. Not exactly the case with this game, but only to a certain
extent. Don’t get me wrong, I’m not saying the graphics are of poor
quality. They’re not. They are everything that pixel fans would expect.
Simple yet satisfying. The biggest issue that I had with the graphics
in this game was the fact that more often than not, all of the little
rebels and cops generally tended to blend together with one another,
creating an nondescript blob of sorts. Especially when you’ve got a whole
mess of the little guys swarming the same location like a horde of angry
fire ants, that’s when it becomes more noticeable. You just have to learn
to pay attention to the colored markers at your people’s feet. Otherwise
graphically, it very well may scratch your pixel itch for a bit. 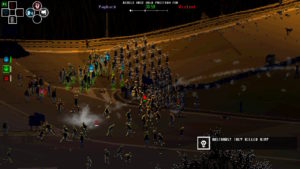 While Riot- Civil Unrest has the appeal of pixelated graphics, it really
doesn’t have a soundtrack per se. It’s mostly just a bunch of sounds that
you might expect to hear if you were in such a scenario as you are playing
in the game, really just sounds of people shouting, the occasional
firecracker sound effect, and things of the like. The sounds are pretty
good though, as I said before…the kind of stuff you’d likely expect to
hear if you were in a similar situation. Although the sound effects are
definitely fitting, they do tend to become rather repetitive and redundant. 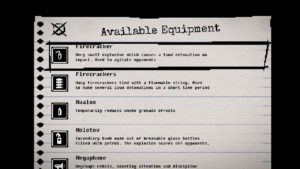 When it comes to the gameplay in Riot- Civil Unrest, there are
several different things that are basically weapons of sorts that you
can equip to various buttons on your joy-con. For example, you can throw
rocks, firecrackers or even molotov cocktails! As far as the “abilities”
go, you can call for “social media” help. Which is essentially calling
more reinforcements, there are also other options that you can use such as a megaphone.

Now, if you’re playing as the police, you’ll end
up having batons or riot shields just to name a few of the options so
it’s pretty appropriate to the playable factions. Each will be used during
gameplay when you try to accomplish whatever your level objective is,
which can vary. Sometimes you’ll be defending something, holding a
position or even trying to overtake a position. 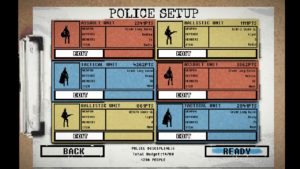 Even considering your weapons and abilities, it’s definitely more unit
control than anything else. You just manage your group (or groups as it may
be) and run down the objective timer, that in most cases is possible simply
through directing your mobs to the appropriate place on the “map”. There
is definitely a whole lot of back and forth involved while you try to
complete your task. Especially when you factor in that each of the levels,

which are obviously playable by both factions, is merely just you switching sides.
The game could definitely have benefited from using the
touch screen that the Nintendo Switch has. Equipment and unit management
feel like they could have been smoother or at least easier to figure out
and control if the game had utilized it seeing as how there really isn’t
too much instruction on what you need to do. I quite often found myself
getting a little frustrated by the lack of touch screen support. Without any
sort of tutorial it’s kind of a shot in the dark, but once you do figure it
out, (which isn’t too awful difficult to be honest) it’s pretty easy to play.

While I’m not going to say that this is a particularly good RTS, it’s
definitely not terrible. The concept is there, just not executed so well
in my opinion. While hardcore fans of the genre likely won’t be impressed
by the game, it’s definitely a good way for newcomers to this particular
play style to sort of dip their toes in the water. Riot- Civil Unrest may
not be the best or fanciest RTS around, but it is definitely something
that will keep you busy for a while. It may not hold your attention for
an extended period of time, but it’s definitely a pretty good way to zone
out for a little while and kill some time with something that’s a little
bit different.

Father of two trying to teach the gaming and Jedi arts to the younglings of the future. You like games? I like games, let's talk games.