Red Faction Guerrilla: Re-Mars-tered for the Switch is the game I never knew I needed until I started playing it.  The third-person shooter style of game is one that I would normally bypass as it is a genre that generally leaves me feeling discouraged and wanting to put it down after only a few minutes.  This game, however, surpassed my expectations. From the moment I jumped in and started playing, I was hooked. It’s open world style and promise of total destruction had me wanting more. 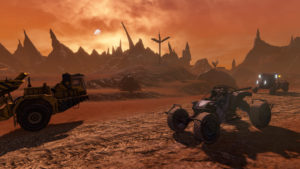 From the opening mission, I found myself pulled in as I went around using a hammer to destroy things and collect scrap.  When the game introduced me to remote charges I began having so much fun that the destruction was gonna be so much fun. Destroying a wall with a sledgehammer was great but toppling whole buildings were even more impressive. The game’s controls are easy to pick up and the opening tutorial does a great job of introducing you to them.  Switching between weapons during gameplay using the R button is a fluid motion that can be done without getting killed in the heat of a shootout. These controls work out well whether you are playing in handheld or docked mode on your tv.

The game has some nice features that make playing a pleasant experience.  At least as pleasant as blowing stuff up and killing can be. The Guerilla Handbook is a nice touch as it allows you to view short videos or read information to help you as you advance in the game.  The ability to upgrade weapons as you collect salvage leaves you wanting to destroy things just so you can get bigger explosions as if you needed another reason to destroy things. The game also has achievements which the collector in me needs to complete.  Things like locating all the mining ore and supply crates make you want to explore every inch of the world that the developers have created. 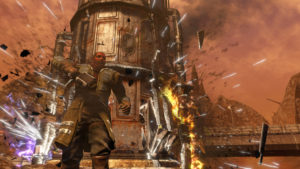 Running around the map and destroying things as you go has its advantages but the real fun comes in when you hope in a vehicle and start driving around the map.  This enables you to cut your travel time around the map in half and helps you avoid those pesky EDF troopers who are trying to shoot at you. Driving however does have a learning curve as the controls do take some time getting used to.

Moving forward and in reverse is fine but if you have to turn around you need a wide open area to keep from running into things. The only downfall of the cars is that they have a health meter just like your player and if you run into too many things it will get depleted and leave you to find another vehicle.  As you go on missions you must remember to be careful where you aim because you can shoot enemies as well as allies. You will have allies join you as you enter into firefights with EDF troopers.

As if the campaign mode is not enough there is also an online mode to go along with it.  The online mode has a matchmaking component that comes up and searches for players. Unfortunately, the screen just did a constant waiting and was not able to find players.  This may change as the game finds its way onto other players systems. If the online mode is as much fun as the campaign it should make a great game even better.

After several hours of gameplay, I have barely scratched the surface of this open world.  Sure I have died a few times. Okay maybe more like a few 100 times but the ability to pick back up and continue playing has made this game a fun experience for me.  That in itself makes this game well worth the time I have invested in it because fun is not a word I generally use to describe my experience with games in the shooter genre.  If you are a fan of the third-person shooter genre then I highly recommend this game. If you are a casual gamer I recommend this game as well. For me a player who does not generally enjoy this type of game I was pleasantly surprised by how enjoyable it was.