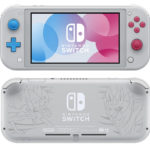 A Special Edition Switch Lite Will Be Coming November 8th.

include cyan and magenta buttons and illustrations of the two new Legendary Pokemon, Zacian and Zamazenta. This edition will also feature a $199.99 price point and will be available on November 8th.

The general layout of the console has not been changed, although the permanently attached JoyCons have lost their rumble feature and IR motion sensors. Although, standard JoyCon controllers can still be connected to the Switch Lite as with a regular Switch.  The biggest addition to this console is a traditional D-Pad over the four smaller buttons previously featured on the JoyCon controllers.

Nintendo of America president Doug Bowser confirmed, however, that Nintendo has no plans to include the Switch Lite d-pad on the traditional JoyCon controllers. When asked by CNET, Bowser said: “There are no plans or nothing to announce, in terms of further variations of Joy-Con.”

The Switch Lite lacks some features from the base model Switch which will cause some software not to be compatible. Only titles that support handheld mode. The Switch Lite does boast a 20-30% better battery life, however. Nintendo has stated they are planning a transfer feature that will allow you to switch between the base model and Switch Lite, although they have yet to detail how that will work.

I grew up on the Atari, Nintendo Entertainment System and the Sega Genesis. I started my love affair with gaming with Mario, as most kids do, and continued it with Dragon Warrior(Dragon Quest for those who don't know history). Some of my favorite games growing up were the simplest, with Adventure for the Atari 2600 being one of the games I had the most fun with. Still to this day I enjoy that game, and those duck looking dragons. Today I play a variety of games when my mind will let me, which comes in spurts. Right now I am playing a bit of Minecraft.