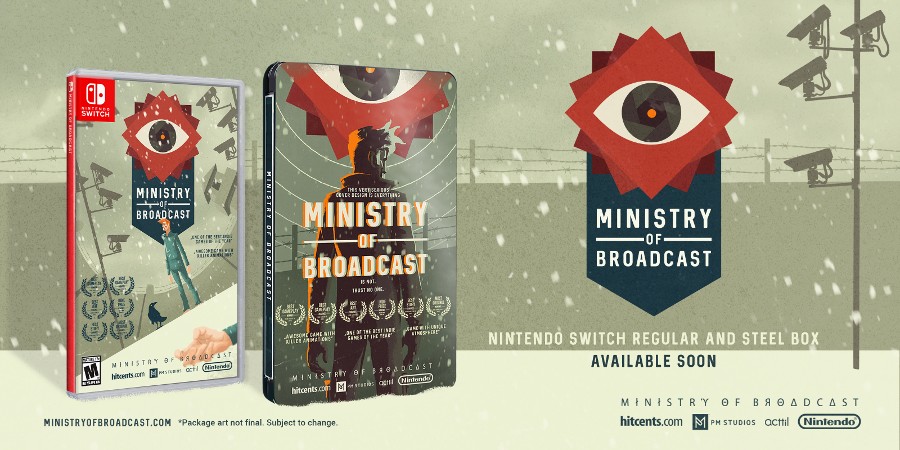 LOS ANGELES, CA.,  — PM Studios and acttil announce today that story-driven, personality-packed action game Ministry of Broadcast will release on Nintendo Switch on May 26 in physical format, previously announced as April 28. The digital release on Nintendo eShop, meanwhile, will be launching on April 30. Also, due to the enthusiastic feedback from fans, all preorders of Ministry of Broadcast will now come with a customized Steelbook and a retail game copy of Ministry of Broadcast packaged together in a collectible box! Fans of the game won’t want to miss this chance to get the extremely limited Steelbook Edition for the same price as the Standard Edition – just $39.99! Currently, preorders are available at online retailers like GameStop, BestBuy, and Amazon.

About Ministry of Broadcast

Ministry of Broadcast embodies the spirit of classic cinematic platformers, where players need finely tuned run-and-jump reflexes as well as a healthy aversion to falling from deadly heights. To earn your freedom and reunite with your family, you must guide our hero through a series of Arenas, which are under the ever-present gaze of the Regime’s electric eye.

Each hazardous, decaying environment houses an array of obstacles that you must navigate—leg-shattering drops (hope you’re not scared of heights), flaming trash barrels (with extra fire and extra stench), inconveniently located spike pits (naturally), dangling steel beams (watch for the rusty bits)—but that’s nothing compared to the fates of the poor souls you’ll meet along the way…

– Cinematic Platforming: Run, jump, climb, and smash your way through each Arena while events unfold around you. Much of the story is revealed through seamlessly integrated animation sequences, environment details, or NPCs dropping bits of dialogue and you sneak, dive, and dodge around them.
– Environmental HUD: Instead of a screen cluttered with distracting indicators, minimaps, and HP bars overlaying the action, all the information the player will need is incorporated directly into the environment. Important hints and clues are subtly incorporated into the game’s art, so players will need a keen eye if they want to get through each Arena unscathed.
– Puzzle Solving: You’ll need to use your wits, and sometimes a dash of ruthlessness, to advance through each deadly Arena. Much of the puzzle-solving requires you to interact directly with the environment; use your own momentum to move platforms, find and flip the right levers, and maybe sacrifice an NPC or two in order to get across an extra spiky pit.
– Story and Personality: The game features a heavy dose of impish humor, grade-A sarcasm, and comic mischief, balanced against the dark, heavy themes of a thoroughly dystopian world.