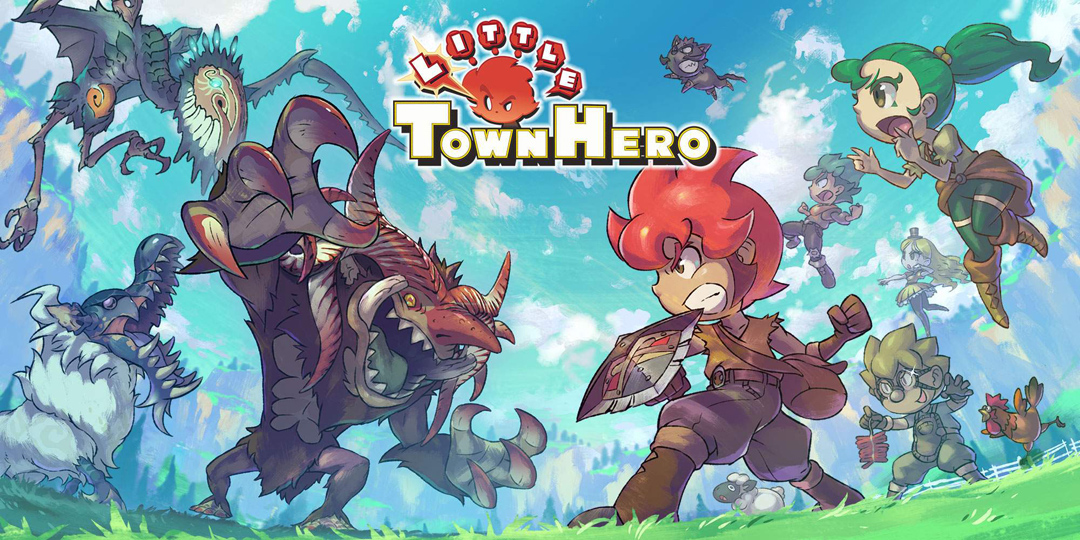 Little Town Hero by Game Freak is a turn-based role-playing game that is very unique.  The game is interesting and vastly different than an RPG that I have ever played before.  Game Freak has taken the collectible card game fighting style approach to create an RPG that plays like a card game in its battle sequences.  It is definitely a surprise that I was not anticipating when first starting to play this game. 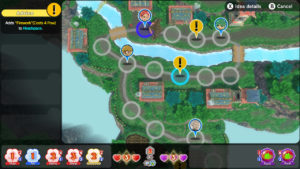 The game consists of a story that you progress through with intermittent battles spread throughout each chapter.  The story is fairly standard you are a kid named Axe, by default or another name if you so choose, who wants to be a soldier living in a small town that has been cut off from the rest of the world to protect its people from the monsters that live outside the city’s gates.  Axe longs to learn more about his town and the world outside its gates but is not allowed to leave and soon finds himself training with a guard from the castle and fighting the very monsters that were supposed to be outside his town but have started appearing in the town itself.  This leads to a mystery that sends Axe and his friends off on an adventure to search for answers.

The game has basic controls available with the touch of a button. You pull up your menu using the x button. Your left thumbstick is used for movement of the character while the right thumbstick can be used to change the camera angle.  In the menu screen, you use the A button to accept your choices while the b button is used to decline and move back out of the chosen menu. You’re A button is used to select people to talk to as you wander around the village and select your attacks during battle. 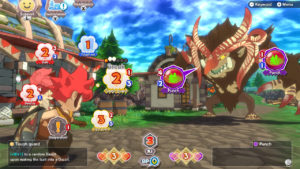 The battle system in the game is very different than any turn-based RPG I have ever played.  Instead of having a set type of attacks the player has ideas known as Izzits that they must choose to turn into Dazzits by purchasing them with points during each turn.  These Izzits that become Dazzits have varying numbers of attack and defense points that they can give and take as they are used to attack the monsters or other characters that might attack you throughout the course of gameplay.

You must be careful in selecting your Izzits as there is a strategy in picking which ones can be used to defeat the opponents Dazzits and give you a chance to strike at them to do damage and ultimately defeat them. There are three kinds of Izzits and Dazzits.  Yellow Dazzits can be used multiple times per turn in a battle. Red Dazzits are only available once pure each battle turn. Yellow and Red Dazzits can be destroyed by the opponents Dazzits if their attack power is more than your defense power. Blue Dazzits serve as buffs or special attacks and are only available once per battle.

This battle system though very repetitive does create a strategy for your fighting as you must choose the best Dazzits to maximize the damage and effectiveness based on your enemy’s available Dazzits. Your choice of Dazzits is limited and can be replenished by using Battle points that you earn as you fight.

The game features a quest that moves the story along as well as sub-quests to extend the story’s gameplay.  You can access these quests through the menu and see your level of completion in the Quests area. You can also check the status of your ideas add eureka points to a skill tree for your Dazzits to increase their power, Travel to the five key places on the map, save your game and change the setting all by accessing the menu options using the x button. 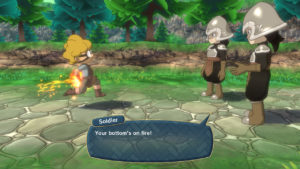 The music and art style are superb as should be expected from a studio the caliber of Game Freak.  The art style is very reminiscent of Pokemon with a musical accompaniment that matches the fun anime look of the characters and settings in the game.  The game’s style is visually appealing and feels like you are watching an episode of a Saturday morning cartoon. The music is beautifully composed by Undertale’s Toby Fox. Perhaps my one complaint with the game was the lack of speech in the game as the characters did not have voices but merely had their lines appear in boxes at the bottom of the screen.

After putting several hours into the game and finishing a couple of chapters I found the game to be fun but very repetitive.  The linear style of the quests moving you to specific places and events left me wanting open-world gameplay so that I could explore more of the world.

It almost felt like I had entered the tutorial at the beginning of the game and could not reach its conclusion after advancing through two chapters I was longing for more freedom in my choices.  I also quickly grew tired of fighting your rival Matock over and over as he tried to prove that he was a better fighter than you only to have him lose repeatedly. For a young new player of RPG’s, this would be a great introduction as it helps you through the events.

For me will I play it more? The answer is yes if only to finish the story and find out the mystery behind the monsters appearing in the town. As a new IP Game Freak has created a solid introduction to a game that could use some tweaks in any future chapters that they chose to publish.  It shows a lot of promise with some minor changes.