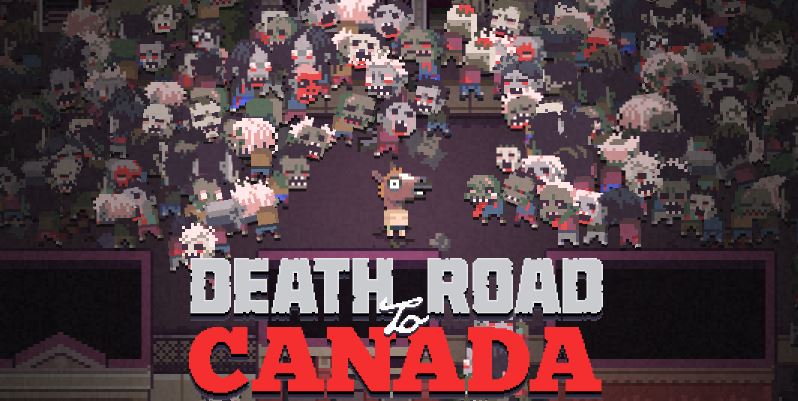 After its initial launch back in 2016, Madgarden and Rocketcat Games’s intense zombie survival action-RPG, Death Road to Canada, is now available on the Nintendo Switch.

Death Road to Canada is a game with a seemingly simple mission; make it to Canada. Now, the only way to get there is by going on a dangerous road trip across the country. You can begin the trip alone or start with a buddy customizing your characters by changing their name and even getting down to the details of hairstyle and clothing on their cute 16-bit bodies. Once selected, players make their way on to the road with 15 travel days to go, thus beginning this Death Road to Canada.

Players of course are welcomed with a tutorial to give them an understanding of what is to be expected. This road trip being taken isn’t exactly taking place in the best of times. Currently, zombies are everywhere and you are dealing with only what remains of abandoned homes and stores during this post-apocalyptic time. This is why there is so much emphasis on wanting to get to the border as soon as possible. The tutorial helps to explain how weapons are used to attack and also how to collect and manage items. This aspect of the game is not hard to grasp and the few controls work just fine in the grips of your Switch. However, the elements in the game itself can take some getting used to and poses a slight learning curve. And though this learning curve can become frustrating with its difficulty at first, it is important to note that getting past or handling certain tough situations in the game is what makes Death Road to Canada fun and should not detour players from seeing it through to its ending.

As mentioned previously, players have absolute control and choice on the entire trip including the story and how it progresses. At the very start of this trip, you get to decide from one of three places to kick off the adventure. Along with each location being randomly generated, once you leave that area more options become available to choose from as well. This is such a great feature in the game allowing for diverse outcomes for different people and different play throughs. For example, while driving on the Death Road to Canada, you may come across a hitchhiker looking for a ride to Canada as well. This is where your story can switch up a bit. At this point in the game you have the options to either pick them up and add them on to your team to help fight zombies or just leave them behind all together. In the instance that you have a packed car of four team members, your only choice is to kick someone to the curb. I know this sounds brutal but hey, if this possible recruit can really aid in your efforts to Canada it may be worth letting your weakest link go.

Other challenges such as deciding whether or not to take a rest stop can directly impact you or your teammates at the next location, thus causing a chain reaction of other events as well. This entire game gives players complete preference, removing any type of linearity in the experience. That means there are no specific characters to meet to progress the story, characters can die, and places that you decide to visit for inventory are both plentiful and lacking. Even though all players will ultimately reach the same point in the game, (Canada) the way that they get there is what makes each play through feel like a new adventure.

The death of characters is pretty inevitable and you are sure to lose an entire team to a heavy zombie raid at some point, resulting in loss of progress. It’s surprisingly easy getting to five remaining days to Canada and losing your last two troops to a pile of zombies at the door causing you to start from the very beginning of the 15 day trip.

Trust me this definitely sucks and made me try different methods for the next time around to try and find success. This “trial and error” approach really makes players think twice when making certain decisions and plan a better execution in the game overall, making it really enjoyable.

Death Road to Canada provides players with hours and hours of gameplay! With randomly generated areas and a total of 10 game modes, you will surely find another reason to pick this game up even after your first run. Looking to play a shorter or longer game? Two additional game modes allow for a trip as long as 25 days and another as short as 9 days. Was normal mode too easy for you? Well, the Deadlier Road Mode gives you that extra challenge by adding 30% more zombies to deal with in the game. Regardless of which mode suits you best, whenever you have an itch to plow through loads of zombies, Death Road to Canada is the absolute go to.

I got 99 problems, but my Switch ain’t one! Big time gamer and comic book reader. I can go on and on about both! Check out my take on all things Nintendo.