Crypt of the Serpent King by Rendercode games is a throwback to dungeon crawlers of yesterday.  It features all the basic weapons, keys, and monsters to fight all while leveling up to face the next threat on the next level. 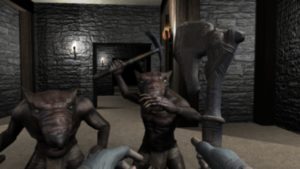 Enter the Crypt of the Serpent King and battle your way through monsters as you open chests to reveal gold, food, and arrows.  Gather keys as you jump across pits filled with lava or spikes to unlock the door and face the main boss of the level. The food is used to improve your health and the gold is used to buy upgraded weapons.  The arrows come into play later in the game when you are able to buy ranged weapons. As you kill monsters you gain XP that can be used to level up your strength, endurance, and agility.

The levels had an increasing difficulty as you moved up but were balanced by the ability to level up your stats and weapons.

The buttons are pretty standard and control the game well.  The only issue that I found was the timing of jumps felt off so I found myself pressing the jump button twice when I wanted to jump so that I did not fall into the pits.

For a small game, it was loaded with many options.  Before you even begin playing the game you are able to customize your audio graphics and input settings.  This came in handy as I was able to adjust the sensitivity of the controls and the brightness of the screen.  On my first run, I ran in with the default settings and found the screen to be too dark and the movement to be not to my liking.  After dying I went back and tweaked those settings and was able to enjoy the game much more. The darkness set the mood of the game perfectly but hindered you from seeing the graphics and even being able to identify the creatures that you were facing.

The game consists of seven levels with a boss fight at the end of each level. The maps in the levels are randomly generated.  Each level has a different theme and background with a different type of enemy to face as you wander through the maze.

The XP boosts range from level 1 to 10 and once you reach the level any other XP you gain is useless.  The game has a total of five melee weapons and two ranged weapons. Each weapon requires more gold than the last to purchase and ranges in damage and rangeability vary with each weapon.  I found it odd that some of the weapons that cost more money did less damage and had a shorter range than those that were cheaper to purchase. The other limitation that came into effect was when you were finally able to buy the crossbow and bow you were given a limited number of arrows.  This was not a problem on the lower levels but became a problem in the final level as the snakes were very difficult to hit without taking damage unless you used a bow. 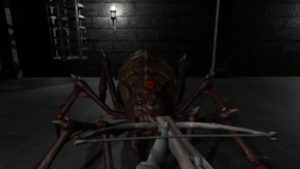 The graphics were well done and I was pleasantly surprised that each new level had a different theme and was not the same brick dungeon of the first level.  The monsters were well designed and ranged from rat people, goblins, orcs, skeletons, spiders, and snakes. The final bosses of each level had a unique design and although not too difficult to defeat with the leveled XP and weapons were still a nice change of pace from the monsters that wander the halls of the crypt. The music of the game was fitting to the setting and the game made a nice backdrop to the sound effects and gameplay.

As a 99 cent purchase on the eShop Crypt of the Serpent King was well worth the cost.  It provided just enough gameplay and challenge to waste away an afternoon sitting at home and swapping the controller with your friends and family as you tried to beat each level.  The game took me back to a simpler time of sitting at my PC and using the keypad, shift key, and spacebar to roam through dungeon crawlers of old.