Folks, yesterday was a CRAZY as Hell 24 hours of Persona-related news.

First off, thanks to Khurram Imtiaz of https://gearnuke.com/ , Several Persona 5-related domains have been discovered. Some of these domains are “Persona 5 S”, “Persona 5 B”, and “Persona 5 M.”

More info about these domains can be found at the following links listed below:

2.  https://personacentral.com/more-persona-5-related-domains-registered-persona-5-s-persona-5-m-persona-5-b/  (NOTE: This site is linked to by the previous website listed above)

This leads into my 2nd story.

The image (listed below) was taken on the P5R site that went live sometime yesterday. It included a Youtube video from Atlustube’s Youtube account. That video announced that more info would be announced in March of next year (2019). It also started by trolling some Switch fans who were predicting and hoping for Persona 5 R to be coming to the Switch by showing the PS Logo splash screen at the start of the “announcement” video. However, it should be noted that the image of the https://p5r.jp/ webpage lists no official platforms below the ATLUS logo, so there’s still a chance that Persona 5 R could POTENTIALLY come to the Nintendo Switch. Also, March 2019 is around the time that Joker is released as DLC for Super Smash Bros. Ultimate, and people are already speculating about Persona 5 R coming to the Switch via a seperate announcement in a hypothetical January Nintendo Direct, so this should be an interesting 3 months of news for sure. 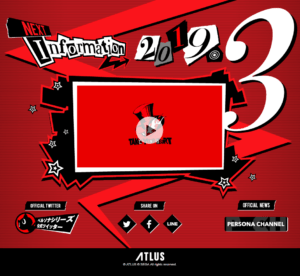 Now, onto the last, and personally my least favorite, story of not just this article, but also maybe the entire year of 2018. Throughout the weeks leading up to yesterday’s surprise announcement of Persona 5 R’s info tease, a Twitter user, respected JRPG translator, and Persona Central contributor/leader MysticDistance was talking about either Persona 5 R or Persona 5 S being a version of the Persona 5 game but for the Nintendo Switch.

When the announcement came and the Switch logo didn’t show up  at all while the PS4 logo did at the very start, a fair amount of people on 4Chan, ResetEra, etc. all ganged up on poor Mystic and (likely) got harassed, threatened, and ridiculed to the point where he DELETED his professional Twitter account over a simple mistake that ANYONE could’ve easily made. Heck, the teaser itself mentioned multiple “new projects.” That’s “projectx” with an S – as in plural. That means of these projects COULD be a Switch game, people. For the sake of keeping this article (and this site in general) family-friendly, I will NOT be stating my full honest-to-God opinions here as profanity is involved. I will say this much about the situation, the fallout, and the other stuff associated with it:  He did indeed have a “holier-than-thou” attitude about his predictions at times, though he DID do a lot of good by translating information, magazines and interviews and announcements about many various games and JRPGs, though teasing certain things without a lack of evidence is rather frustrating at times.

If you still want to read my honest opinions about this whole scenario, here’s a 6-Tweet chain I made about this (Warning: Contains a bit of foul language): https://twitter.com/BryanGamingNews/status/1079494218882666496