Battle World: Kronos is a turn-based strategy game that leads heavily into tradition.  It uses the classic hexagonal format for movement and attacking of enemies and consists of a campaign, single player and multiplayer mode.  The Sci-Fi storyline is derivative and feels like so many that have come before it. It was disinteresting and leaves you caring less about the story and more about the destruction of the opposing forces. 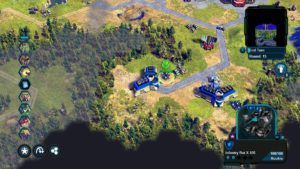 The game allows for setup with changes to the language, volume, difficulty level, and cursor speed.  The biggest advantage of this was the difficulty levels. Players can choose to set the game to Explorer, Challenging, or Hardcore which changes the amount of damage that your troops give or take in battle.  This makes the game accessible to players of all skill levels.

The trickiest of the settings to get right is the cursor speed. It takes some time to figure out the best setting for your style of gameplay. The game can be played in both docked and handheld mode. After trying the game in both docked mode on the tv and in the portable mode the game seems to be more suited to the handheld mode as the touch screen can be utilized to make movements easier than the controller. Using the touch screen made it easier to discover the tips that appear on the left side of the screen.

The game has three campaigns consisting of 17 missions with cutscenes between every two to three missions to move the story along.   The campaign mode takes you through a story that gives you a basic idea about the reason for the conflict between your troops and the other faction.  The game gives you a basic tutorial of how to play but the directions are somewhat vague and leave you to figure out the movements and methods of attack of each vehicle on your own. The gameplay relies heavily on your ability to place your troops in the correct position to enable your attacks and to avoid your opponents. 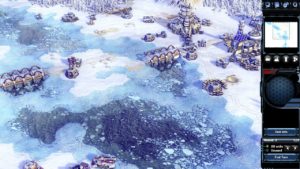 The single-player mode consists of challenge maps which require you to use the different strategies of the game.  There is a map for defense, capture, conquer, and protect. This is a good way to practice and hone your skills if you have reached a point in the campaign mode that is difficult to pass or a tough opponent in multiplayer mode that you cannot defeat.  After defeating the campaign mode on all three difficulty levels and playing through the single player mode there is not much room for replayability.

Multiplayer mode has 16 maps to choose from that vary in size.  The maps come in tiny, small, and medium sizes. The major focus of the multiplayer missions is to control the map whether it is a base, building, or headquarters.  The 16 maps accommodate between 2 and 4 players to compete with the 4 player map allowing for teams to compete. Multiplayer is local meaning in order to play you must pass the controller or system between people in the same room with you.  Disappointingly this game does not support online multiplayer which would open up the potential for time spent playing this game. Sure you could play the multiplayer mode with friends but the multiplayer just doesn’t seem as fun as it could have been with online support for when you are playing on your own without friends.

This game although it begins with a steep learning curve does begin to grow on you and the sound of destruction that you hear when you destroy enemy vehicles becomes strangely satisfying.  King Art Games has created a game that is accessible to players of all skill levels. It does some things well and relies on the most basic tropes of the genre and game type. If you are a fan of classic turn-based strategy games this one is for you.