This is a guest post and review from our friend Josh over at Switch Mania on YouTube. After the reading his review, be sure to go over to his channel and subscribe. He produces really excellent content, and I am glad to have him featured on JoyCon Gamers.

When I first saw Aragami Shadow Edition’s Trailer for Switch, I got pretty excited. The graphics and gameplay looked compelling and having skipped over the game on my PS4, I was looking forward to playing an amazing stealth game on my Switch. However, while Aragami has some intriguing mechanics I ultimately found the game to be a little disappointing. 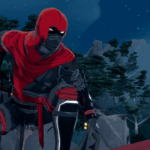 In the game, you play as the shadow spirit Aragami. Aragami’s spirit has been brought to the world by Yamiko, a girl who has been captured by the light army Kaiho. The whole 13-Chapter story revolves around Aragami trying to save Yamiko from the Kaiho by either sneaking around them or picking them off one by one in a true ninja-like fashion.

All of this sounds very appealing on paper and for the most part that is true. However, the one thing that truly stops Aragami from being a great game is how repetitive each chapter feels. After the first several chapters, I felt myself using the same strategies over and over to defeat enemies and complete objectives. While levels could sometimes get challenging, it was rarely because the level introduced a truly challenging aspect. Usually, when I lost a level, it was just the sheer number of enemies I was presented with and my ability (or lack thereof) to spot them.

Combat was repetitive much in the same way. There are three ways to play Aragami in terms of combat. You can be the pacifist, the assassin, or a mix of the two. While I often opted for the pacifist route I was sometimes forced to take out a pesky archer or a stubborn guard who was in my way. If you decide to be an assassin or take a guard out you must do it stealthily as there is no straight forward combat system (like light attack/heavy attacks). If you are ever discovered by a guard, the Kaiho will immediately sound up an alarm. With a one-hit kill system, if Aragami is discovered, it often leads to his death. When Aragami dies, you start again from the nearest checkpoint (often times at the beginning of that level). This often led to me using the same techniques to complete levels so that I could avoid having to start over. I get that the developers were wanting to encourage a truly stealthy approach, but I feel that the addition of a fighting mechanism that didn’t rely on stealth would have made the game feel less repetitive in many aspects and opened up more options for the player.

The best part of the game was without a doubt Aragami’s excellent unlockable skill tree. As you go through the game, you will come across several hidden scrolls. By finding a certain number of these scrolls you can unlock new abilities for Aragami to wield. Abilities like being able to disintegrate a body into shadows or using shadow shuriken really helped to add a fresh element into the otherwise repetitive gameplay.

If you can look past the repetitive nature of the game, Aragami is truly a joy to play. It has beautiful graphics that are visually appealing and really pop on the Nintendo Switch’s screen. The gameplay is fluid with hardly a drop in frame rate and the number of members in the Kaiho’s Army make gameplay challenging even on the regular difficulty setting. I feel that Aragami’s digital price of $30 is a fair price for its beautiful graphics and level design. That being said, I don’t know that I would go for the $40 physical version. Even as someone who prefers physical games myself, I feel that $40 is just a little too much for this game. Even so, maybe wait for this one to go on sale before picking it up.

This is a game that I really wanted to play, I might still pick it up when it is on sale.